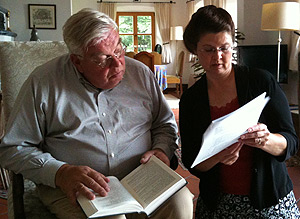 Janet Heukeshoven and Bastiaan Blomhert discussing the Harmoniemusik of the Barbiere di Siviglia (Summer 2010)Rossini was the most prolific composer of operas in his time and therefore his works were subject to wind arrangements (see Harmoniemusik). Many if not all operas by Rossini have been arranged and are still available in Central-European archives.

Floricor Editions is very proud to present the edition of the American Harmoniemusik researcher Janet Heukeshoven.