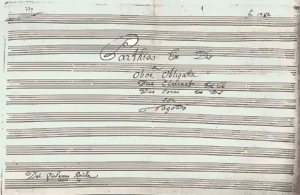 Title page of the autograph score (1782) of Josef Reicha’s Parthia ex Dis. (F.E. 0206) It is one of the few Harmoniemusik scores that still exist.Nowadays Joseph Reicha (1752-1795) is merely known as the uncle of Anton Reicha (1770-1836), who became famous as music theorist and teacher of many 19th Century musicians (among them Hector Belioz and Franz Liszt). Joseph Reicha however made an impressive musical career as ‘cellist, composer and orchestra leader. As early as 1774 he got the position of principal ‘cellist in the orchestra of Count Ernst Kraft Prince von Oettingen-Wallerstein at Harburg castle (Donauwörth, Germany).

Leopold Mozart was full of praise of his abilities after a concert in Salzburg in 1779, in which Reicha performed with Nannerl Mozart.

In 1785 Reicha became leader of the Electoral Court’s Orchestra (of Maximilian Franz of Habsburg) in Bonn. Here, he conducted a very extensive repertoire of operas and church music. As teacher he influenced his nephew Anton (who studied with his uncle in Bonn) and the young Beethoven. Although a stringplayer originally Joseph Reicha displays a keen use and understanding of wind instruments in his 12 Partitas for Harmonie, which is shown in this Parthia ex Dis (in E-flat) from 1782 as well.