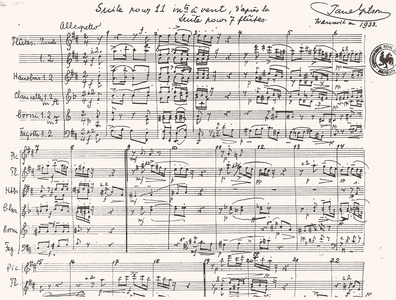 First page of Gilson’s autograph score of Suite pour 11 instruments à vent, d’après la suite pour 7 flûte (F.E. 0416). Gilson wrote many works for winds, both in large and small combinations. Floricor Editions present four of his works for the first time in a printed edition.Paul Gilson was considered the most important Belgian composer of his time. He was mainly self-taught. His compositional ideas were inspired by two of his contemporary styles, the Wagnerian chromatism and the “national”music of The Five, Rimsky-Korsakov, Mussorgsky, Balakireff, Borodin and César Cui, with whom he had an extensive correspondence.

Gilson composed music in all genres ranging from chamber music to dramatic works. He is particularly praised for his orchestration.

After 1905 he turned to teaching and, although he still composed, he produced a number of treatises: on harmony, on the military orchestra and on the tutti orchestration in a symphony orchestra score.
Gilson wrote a fair number of works for wind ensemble. Floricor Editions is proud to present four of them in their first printed edition.